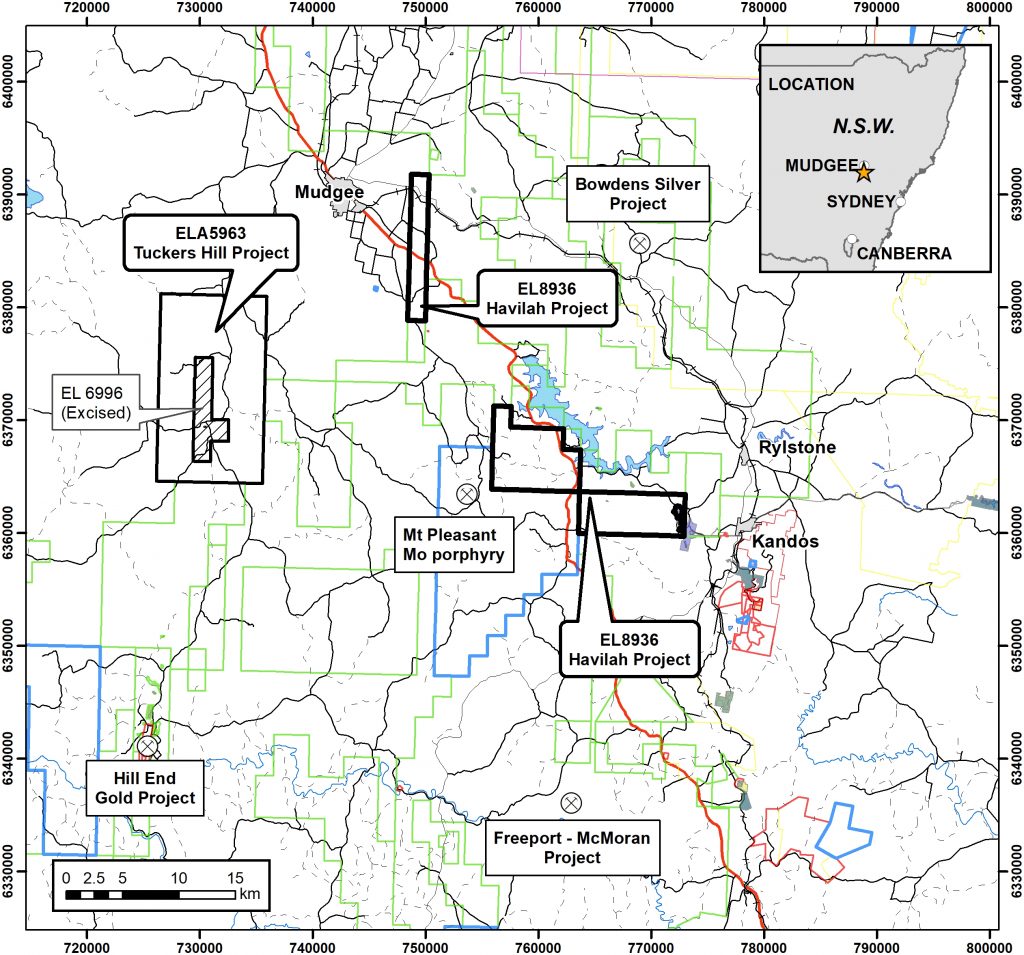 Golden Deeps  has commenced a desk top study of the Havilah and Tuckers Hill Gold Projects and has identified several priority gold and base metal targets. Field checking, geological mapping and additional sampling is planned prior to drilling testing. Fieldwork will commence when travel restrictions related to Covid-19 are lifted and the Tuckers Hill tenement is granted.

The Tuckers Hill Project (ELA 5963) is located ~20km southwest of the town of Mudgee in New South Wales, which is 265km by road from Sydney (Figure 1). The project covers an area of 140km2 at the northern end of the Hill End Goldfield, and includes the historic Tuckers Hill, Maitland and Reef Hill workings. The Tuckers Hill Project is located within the Bathurst-Hill End-Mudgee belt that hosts the Hill End Gold Project with a reported Mineral Resource of 4.68Mt at 3.3g/t Au (501,552oz contained gold)2 of which 2.32Mt at 2.38g/t Au (177,652oz contained gold) is at Hargraves adjacent to Tuckers Hill. The NSW Planning, Industry and Environment MinView website describes the workings at Tuckers Hill as an area of 1,500m by 800m that has been extensively worked with shafts and tunnels. The style of mineralisation is interpreted to be orogenic slate-belt gold style, similar to the gold deposits of Bendigo and Ballarat in Victoria.

Previous geological mapping has identified gold bearing saddle reefs and ‘leg’ reefs in a folded sequence of siltstone (slate) with minor sandstone, including a prominent volcaniclastic sandstone (Merrions Tuff). Tuckers Hill is an elongate north-northwest trending anticline that plunges to the north and south. Multiple saddle reefs have formed in the apex of the fold at the top of Tuckers Hill with narrow but high-grade ‘leg’ reefs on bedding contacts on the fold limbs (Figure 2). The contact between the siltstone and the medium grained volcaniclastic sandstone is an important control on the formation of the reefs. 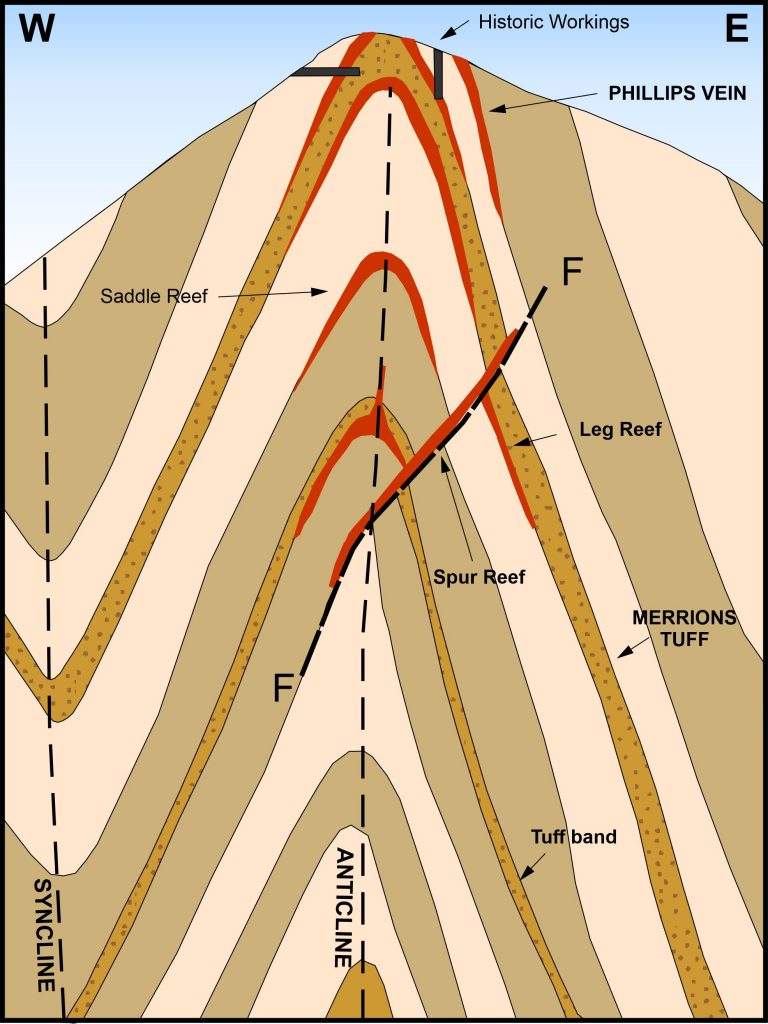 Twenty-four rock chip samples taken from surface trenches and shafts along Philips Vein at Tuckers Hill by C.W.Marshall and Associates in 1963 assayed between 1.27g/t Au and 705g/t Au4 with an average grade of 68.45g/t Au. Philips Vein is one of several narrow north-northeast trending veins on the eastern side of Tuckers Hill.

Three saddle reefs are exposed in the cutting for the Hargraves-Mudgee Road that traverses the top of Tuckers Hill. The reefs plunge to the north at ~20 degrees. Historic mining has focused on exploiting the quartz reefs where they are exposed at the top of Tuckers Hill. The detailed structural setting of the reefs was probably not fully understood and as a consequence the reefs were not followed to the north where they dip below ground. A search of the open file records has found no reference to drilling at Tuckers Hill.

Following check sampling and detailed mapping to confirm the conceptual targets, Golden Deeps plans to drill test for repetitions of the saddle reefs below Tuckers Hill. Drilling will also target the reefs down plunge to the north and south of the workings at the top of the hill. The saddle reefs will be narrow targets for drilling but could be high-grade and extend for a considerable distance along the north-northwest axial plane of the fold. There is also the possibility that the reefs are stacked vertically making them a more attractive target for mining.

The Havilah Project (EL8936) consists of three granted tenement blocks with an area 102km2 (Figure 4). The project predominantly covers Silurian and Devonian sediments and volcanics of the Hill End Trough to the west of the Wiagdon Thrust/ Mudgee Fault. In the southern block of EL8936 there is a belt of Ordovician Sofala Volcanics. Ordovician to early Silurian volcanic and intrusive rocks of the Macquarie Arc host several major deposits including North Parkes, Lake Cowal and Cadia/Ridgeway. 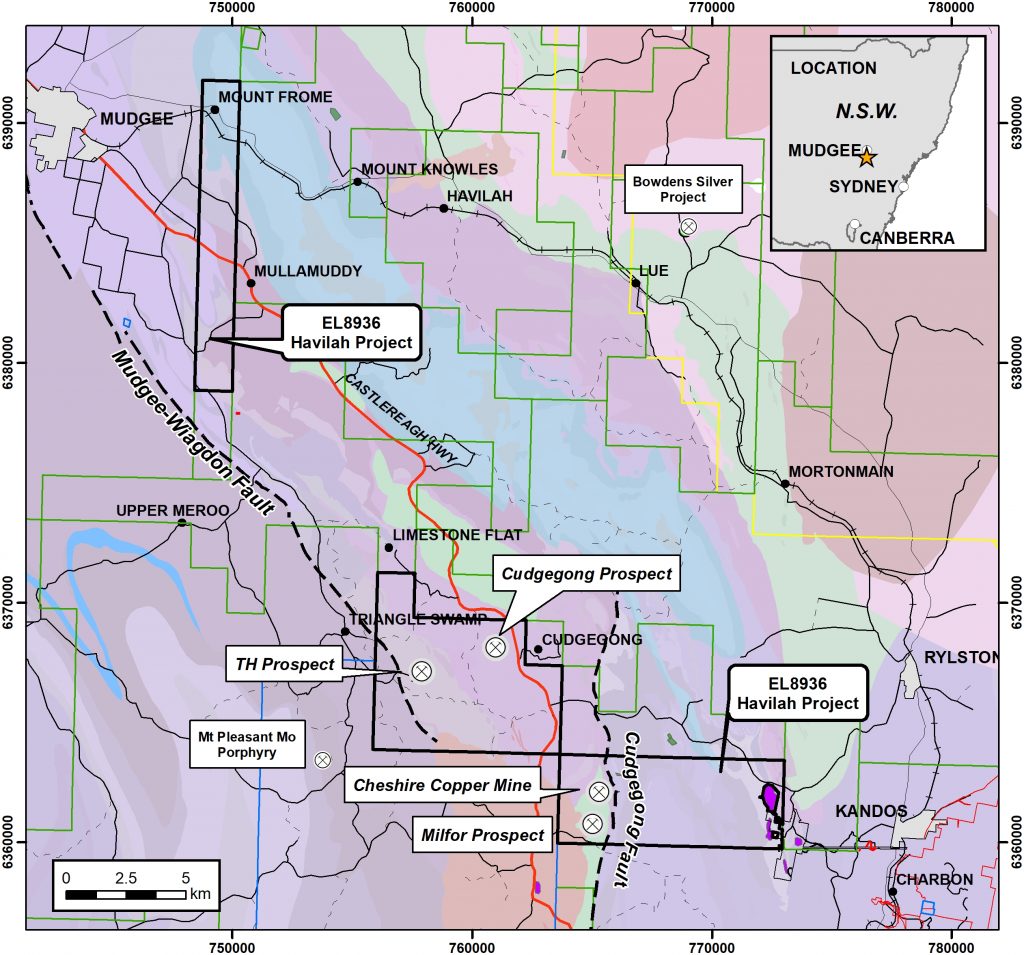 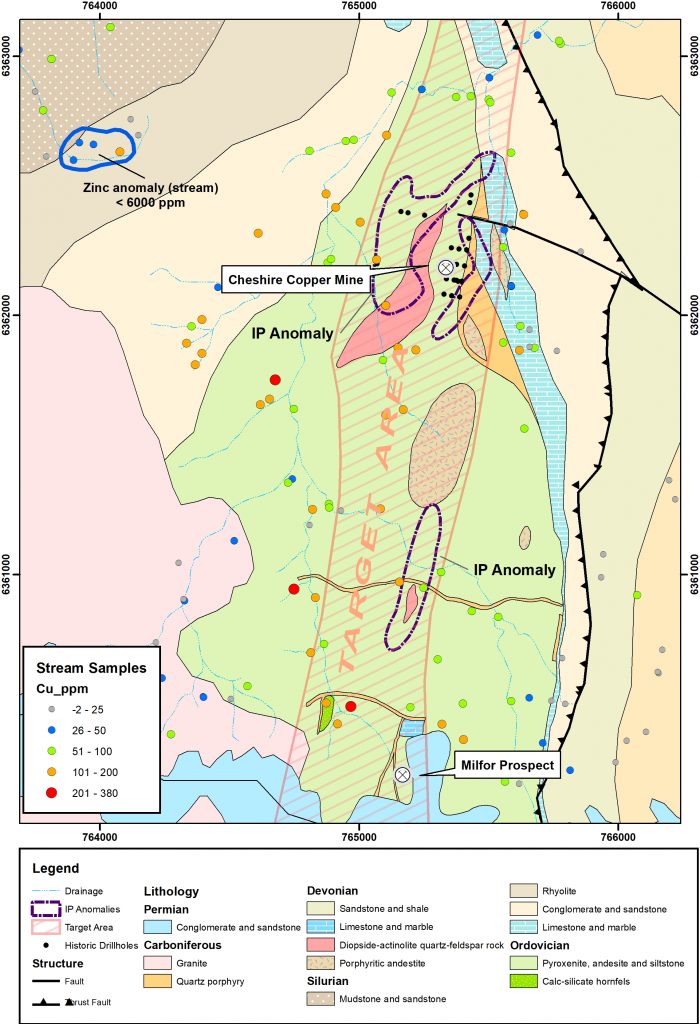 The Cheshire Copper Mine comprises several shafts, workings and an old brick kiln. Copper mineralisation is spatially related to a shear up to 2m wide close to the contact between andesite and rhyolitic volcanics. At the Milfor prospect 1.4km to the south there is a group of workings that have exploited disseminated and veined copper mineralisation in andesite. The prospect was discovered by regional stream sediment sampling with anomalous copper values covering an area of 2.5km by 1km. Follow up soil sampling confirmed an anomalous trend between the Cheshire Mine and Milfor prospect. A subsequent induced polarisation survey located several chargeability anomalies coincident with exposures of diopside-actinolite skarn (Figure 5). A 20 hole percussion drilling program was conducted at the Cheshire Mine by Mt. Hope Minerals NL in 1973 with holes drilled to a maximum depth of only 21.3m. PDH001 intersected a best result of 3m at 1.45% Zn, 0.1% Cu from 12.2m and PDH009 intersected 4.5m at 0.29% Zn, 0.12% Cu from 6.1m. The holes were not assayed for Gold.

There has been no additional drilling or effective exploration at the Cheshire Mine-Milfor prospect since the 1970s. Golden Deeps plans to conduct systematic exploration of the geochemical and geophysical anomalies within the Ordovician volcanics commencing with 2km x 3km grid-based soil sampling programme. Priority targets generated will be tested with RAB/RC drilling. The Milfor prospect and some of the IP anomalies overlying skarn rocks have not been drilled previously.